A lot of people interested in going light are trying alcohol as a fuel.  But if you head down to the store, you'll see all kinds of alcohol.  Which alcohols are good choices for stove fuel?  Which ones are poor choices?

Alcohol as a Stove Fuel (in order of best fuel to worst fuel)  The best alcohol fuel is ethanol (ethyl alcohol).  It has the highest number of calories per gram* of any stove fuel suitable alcohol (I really don't consider dirty-burning isopropanol to be suitable as a stove fuel) and burns reasonably cleanly.  If you can get lab grade "absolute" (200 proof) ethanol or 190 proof liquor, that's going to work really well, but both of those (lab grade absolute ethanol or 190 proof "drinking" alcohol) are pretty expensive -- if you can even get them.  Lab grade absolute ethanol is often restricted as to whom can purchase it (i.e. not the general public), and many locations prohibit the sale of high proof drinking alcohol.  Check the Materials Safety Data Sheet (MSDS) on lab grade absolute ethanol which may contain benzene which is toxic.

Another option is "denatured" alcohol which should consist primarily of ethanol.  The problem in the US is that there are no standards for what constitutes denatured alcohol.  In fact, some denatured alcohols in the US are less than 50% ethanol.  In addition sometimes nasty stuff is used to denature the alcohol (render it undrinkable), stuff like methyl ethyl ketone, whose fumes you don't really want to breathe.  "Green" denatured alcohol generally has a much higher ethanol content and a lower "nasty stuff" content.  Check the MSDS.  The higher the ethanol content, the better it is for use as a fuel.  Because higher ethanol content alcohol burns hotter, sometimes the burning will "get ahead of itself," and you'll get some soot.  If the stove is overheating and producing soot, try adding water to the fuel (after you get into your camp site; don't carry it!). Adding water will calm down the burning, allowing the alcohol to mix properly with air and burn cleanly.  Try adding a little water at first, and then add more water as needed to eliminate any soot (up to 25% of the total volume). 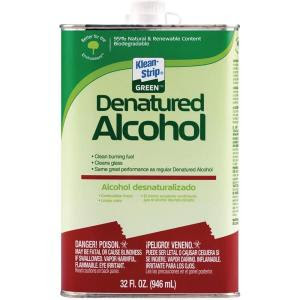 Methanol (methyl alcohol) is another popular fuel alcohol, frequently bought in the yellow HEET bottle because HEET is so widely available (at least in the US).  You do have to carry a bit more methanol to do the same amount of cooking since methanol contains fewer calories per gram* than ethanol.  Methanol fumes are toxic, and methanol absorbed through the skin is toxic.  How toxic?  If you're cooking out doors, I don't think fumes will be too bad if you're observant of wind direction and position yourself accordingly.   I don't have a way to state a safe limit for skin absorption, but handling with care should be enough.  It's not like you hear about a lot of through hikers on the Appalachian Trail (AT), where yellow HEET is easy to get and very popular, getting stricken with methanol poisoning.   Methanol has a higher vapor pressure than ethanol and works better than ethanol in cold weather.  I can't comment a lot on methanol performance in cold weather because I typically bring a gas or liquid petroleum fueled stove for cold weather.  Conversely, methanol can have "runaway thermal feedback" in hotter weather.  "Runaway thermal feedback" basically occurs when the alcohol gets so hot that it boils really violently and doesn't burn efficiently.  Adding water (see remarks above) can help calm down a burn so that the alcohol can burn more cleanly. 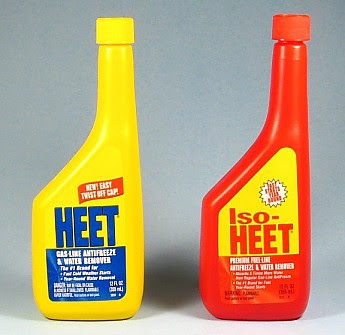 With any alcohol fuel, your flame velocity is going to be fairly low (think candle as opposed to blow torch).  Therefore, an effective wind screen is really essential for an alcohol stove.

SUMMARY
The best choices for fuel for an alcohol stove are:
1.  Lab grade absolute ethanol (200 proof) or high proof liquor (190 proof).  High heat content per gram (relative to methanol), relatively clean burning, and generally non toxic, but check the MSDS on lab grade absolute ethanol which may contain benzene which is toxic.  A good choice for warmer weather.
2.  "Green" denatured alcohol in the US or methylated spirits (ethanol with methanol used as a denaturing agent) outside the US.  Methylated spirits is often called "meths" or "metho".  Good heat content, relatively clean burning, fairly non-toxic depending on the amount and type of the denaturing agent.  In the US, always check the MSDS.  A good choice for warmer weather.
3.  Methanol, for example yellow HEET.  Decent heat content, very clean burning, but definitely toxic in terms of fumes and skin absorption.  Reasonably safe if used with care.  A good choice for colder weather.
4.  You can use Isopropanol, for example red HEET (Iso-HEET), but it is not really suitable as a stove fuel because it's generally a sooty mess when it burns.  Highest heat content, but dirty burning, and definitely toxic.  Not recommended unless you have a specialized stove specifically designed for it.