Stove of the Week: The Caldera Cone

This week's stove is the Caldera Cone with 12-10 stove from Trail Designs. My review of the stove is available at Seattle Backpackers Magazine.  This blog post that you are now reading is a supplement to the review on Seattle Backpackers Magazine and features additional photos and content that would not fit in the magazine article.  I've also added a technical appendix with weights in grams and ounces at the end of this blog post.  As for why the Caldera Cone is such an efficient alcohol stove system, please see The "Magic" of the Caldera Cone. 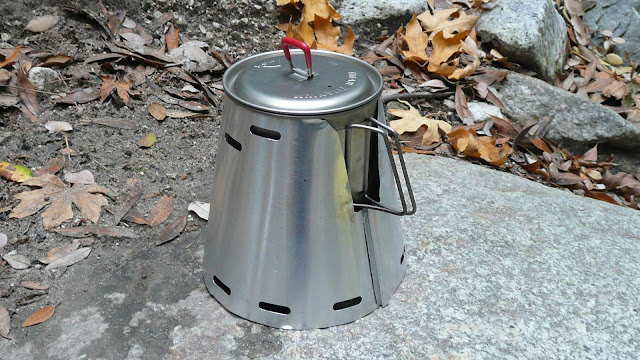 UPDATE, 25 Nov 2011:  Several of you have written to me saying that the one can actually cook with a Caldera Cone and have described various modifications such as simmer rings that allow such a thing.  Although the Caldera Cone wasn't really put together with the idea of cooking in mind, the ingenuity of the individual backpacker should never be underestimated!  Thanks for the feedback, everyone.
First, be aware that Trail Designs offers many different types of cones.  Some, like the one shown above are of one piece.  Others are of multiple pieces.  Some, like the one shown above, are of aluminum.  Others are made of titanium.  Generally each cone will only work with a specific pot.  The cone in my review and featured in this blog post basically fits only the pot shown above, the MSR Titan Kettle.  I did find one other pot that will fit this cone, but that was just a coincidence.  Generally you must buy the cone that matches your pot or you must buy the pot that matches your cone.  With a pot like the MSR Titan Kettle that can be used as a kettle, a pot, or a mug, I don't find this only-one-pot-for-a-given-cone situation particularly restrictive, but you should consider your needs, your style, etc before you invest in such a system.

At a minimum, Trail Designs sells a cone and a 12-10 stove together.  One frequently purchases the pot separately (as I did).  You can buy packages that may save you money.  Packages are at least worth looking into.

Generally, it's not a good idea to buy just a cone and then just use whatever alcohol stove you happen to have handy.  Inside the cone, you have a high heat, low oxygen environment.  The 12-10 stove has been specifically tuned for this environment.  Not all alcohol stoves will function well in this environment.  If you do choose to use another stove, test it thoroughly before you head out on the trail.

Here's the set packed:
And here's the set unpacked:
Everything in the "unpacked" photo fits into the package shown in the "packed" photo.  People have asked, so let me list a source where one can obtain each of the components shown above.


Here's a closer look at some of the components.
I am happy to report that the 12-10 stove has plenty of "juice" with which to give you a good strong boil.
The cone dovetails together well and is very stable when assembled.
Here are some of the typical components I carry in my set up.  The eye dropper that you see in the photo below is to retrieve unburned alcohol.  I normally measure out just enough alcohol using the little medicine measuring cup shown in the photo, but if I put too much alcohol in, I can snuff the flame with a cup or pot, and then, after things cool down a bit, I can extract the unburned alcohol with the eyedropper.  Frankly, it's better to to measure out just enough alcohol.  Extracting 100% of the unburnt alcohol is usually pretty difficult to accomplish.
Note that in the photo above, the cone, when rolled and inserted into the Ziploc container, sticks out a little bit.  In other words, you cannot screw on the lid of the Ziploc container when the cone is rolled up inside.  For me, this is not a big deal.  I simply fit the lid of the Ziploc over the rolled up cone.  The edges of the rolled up cone fit into the indentation of the lid, and the lid stays in place.  Note in the photo below that the blue lid is not attached to the threads of the Ziploc container,  Rather the lid is held in place by the rolled up cone.
Once the Ziploc's lid is in place on the rolled up windscreen, I place everything in the stuff sack.  Once everything is in the stuff sack, I place the lid from the Titan kettle on top of the blue lid as shown below.
All of the components fit pretty neatly and securely into my stuff sack.  I haven't had any problems with the cone getting beat up when carried as shown.
People have asked, so let me mention that the long, tall stuff sack that I'm using is a perfect size.  The stuff sack is from an old First Need water filter.

Now, for all you DIY'ers out there, here's a video I saw on YouTube of how to make a Caldera clone. Personally, I like the Trail Designs product, but many people love DIY, so here you go:


Finally, let me leave you with a "demonstration" of the proper use of the Ziploc container as a bowl.
I hope these additional remarks and photos are a good supplement to the magazine article.

P.S. This blog post is part of my series on the Caldera Cone. In case you missed any of the series: