Why I've been lusting after one of these ever since I saw it in the Kovea catalog.  Aye, and she's a nice one.
Look how compact that is!  Yes!  What a sweet little stove.  Now, I own a number of stoves that are capable of running on a remote gas canister (Rapidfire, Windpro, Omnifuel, OmniLite Ti, Whisperlite Universal, etc.), but every one of those stoves is essentially a big, white gasoline type stove converted to run on canister gas.  None of them are particularly light or compact.  The lightest remote canister stove that I've got is the Windpro II at 187g/6.6oz.  The Kovea Spider weighs in at 168g/5.9oz which while almost 3/4oz lighter isn't really all that much of a weight savings to be perfectly frank.

But weight's not the whole story, now is it?  Packability ranks very high on my list thank you very much.  I like to be able to put my stove and a canister of gas inside my pot.  It is here, in the packability department that the Kovea Spider shines.  I tried my Kovea Spider in my 780ml Snow Peak Ti pot.  It fit great, along with a 110g Snow Peak canister of gas.  Note:  The 780ml Snow Peak pot has a frying pan lid.  Not all 780ml pots will work.
I was also able to fit the Kovea Spider into my 850ml Titan kettle, again with a 110g Snow Peak canister of gas.  It's a bit tighter fit even though the Titan kettle has a larger capacity due to the kettle's proportions, but I was able to get it to fit and to close the lid.  Now that's pretty sweet.
By comparison, while I can fit the Windpro II into either a Snow Peak 780 or the Titan Kettle, I can't even begin to fit a canister of gas inside when there's a stove in there.

Now don't get me wrong, I like the Windpro II; it's a good stove.  It's just that I've been wanting something lighter and more packable for some time.  For groups of 3+, I might still choose the Windpro II, but for smaller parties, say from 1 to 3 people, I think the Kovea Spider will do very nicely.

UPDATE 07 June 2017
Here's the orientation necessary for the Kovea Spider and a 110 g canister of gas to both fit into an 850 ml MSR Titan Kettle (see photo, below).  Basically, you coil the hose tightly but without kinking anything.  You then stand the stove upright.  The burner must be up.  The canister must then sit on its side with the concave side toward the stove.  It's tight but it does fit, and I can get the lid on and closed.  You may have to jostle things around in there a bit, but it does fit.  You want to orient things such that no part of the stove presses on the lid.  If any part of the stove is pressing on the lid, the lid won't close fully. 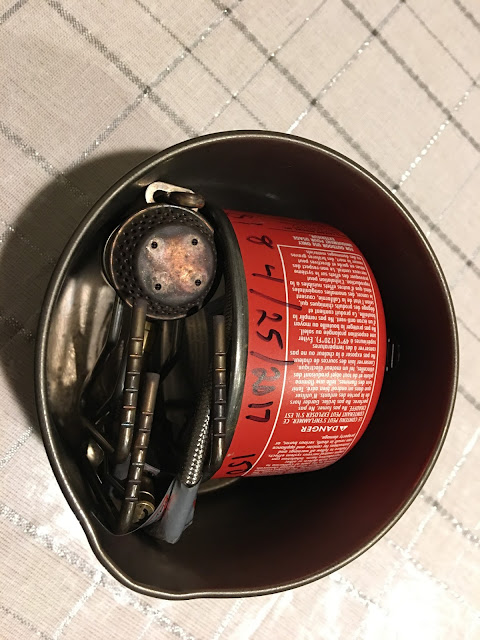 Here's a video where I compare the packability of the Kovea Spider with that of an MSR Windpro II.  In the video, I state that the Windpro II weighs 8 ounces, which is NOT correct.  I must have been thinking about the stuff sack and windscreen or something.  The correct weights are 168g/5.9oz for the Spider and 187g/6.6oz for the Windpro II.


Well, that's very nice that it's a bit lighter and a whole lot more packable, how about the stove itself?

Ah, good question.  And in answer, let me say that I'm suitably impressed by Kovea's workmanship.
I like the overall build quality and fit.  There are some nice touches like the fold out wire flame control.
Some of the cheap stoves coming out of China have a small knob here which is much harder to work when wearing mittens.  I've also seen the knobs on cheap stoves jam -- and unscrew right off the end of the spindle.

The stove comes with a pre-heat loop, so that you can gain about a 20 Fahrenheit degree (about 10 Celsius degrees) cold weather advantage over conventional upright gas stoves by running with the canister upside down, which causes the stove to be fed liquified gas.
Here again is why I prefer an experienced and accomplished stove maker like Kovea over some of the cheap stoves coming out of China.  In inverted canister operation, some Chinese stoves have had particles break off from their hoses (improper materials were used) and still others had a "stutter" caused by liquid fuel reaching the burner even though the stove had a pre-heat loop (bad design).  At least with inverted canister operation, Chinese stoves don't appear to be quite up with their European, Japanese, Korean, and American designed counterparts.

The burner head of the Kovea Spider is small, but this should be nothing new for those who have been using light weight conventional (upright) gas stoves.
Now, take a look at the photo below.  Notice the downward pointing arrow on the leg/pot support?  The legs of the stove snap into place with a very positive lock.  No flopping around here.  To release the leg, simply push down as the arrow indicates, and rotate the stove's leg inward for packing.  Nice touch.
In terms of flame characteristics, I found that I could go all the way from a low simmer.
To a very full blast.
The Kovea Spider has plenty of power and easily brings water to a full roiling boil.  Notice also, in the photo above, that the flame angles outward from the burner head.  Even though the burner head is relatively small, the flame is well distributed, and you don't get as much hot spotting as you might from other similarly sized burner heads.
With a rotating coupler, the Kovea Spider is easy to use in either normal canister or inverted canister mode.
And of course, since it's a remote canister stove, you can use a full 360 degree windscreen without fear of overheating the canister.

In terms of pot sizes, the legs can support a wide variety of pots.  The smallest diameter pot I tried was an MSR Titan kettle, but a smaller pot would be no problem.  However, if you want to fit both the stove and a canister of gas in your pot, you can't go smaller than a Titan kettle.
The largest pot I tried on my Kovea Spider was a 1300ml Evernew Ultralight Ti pot.  It worked great, and there's no reason why you couldn't use an even larger pot.

The stove comes with a detached piezoelectric ignition.
The ignition is nice, but since I carry a butane lighter on every trip already, I found myself sometimes leaving the piezo ignition at home.  Interestingly, the Kovea lighter appears to be identical in every way to the MSR lighter sold with the MSR MicroRocket, except for the color and brand name.

The Kovea Spider is easily my favorite gas stove to have come out in 2012.


Concluding Remarks
I mentioned that I thought the stove was a bit heavy for what it is.  Now, don't take that out of context.  This is a very nice stove and has definitely made it into my "go to" gear bag.  But I think more progress can be made here in future generations of the stove.  The stove should be at least one ounce lighter than it is now and preferably two.  To you Kovea, I throw down the proverbial gauntlet.  If you don't do it, the Chinese will.  I'd like to see you succeed because I know you will make a far better stove.  I sincerely hope that you will take up this challenge.  I want the stove that you will build!

Lastly, the Kovea brand is not available through conventional channels in the United States, but I do see the Kovea Spider being sold on eBay.  The price I see listed is $52.90, which is roughly half of similar stoves from American producers.  The Kovea Spider is not only a darned good stove, it's a darned good deal.  It's my favorite inverted canister stove and my first recommendation to anyone looking for either a remote canister or inverted canister stove.  In case you haven't already figured it out, I really like this stove.

UPDATE 31 October 2014:  The Kovea Spider is now available through several US retailers.  Note:  The links below do not constitute an endorsement of any of these retailers.  I haven't necessarily ever purchased anything from them.  This is just for your information.
Thunder Adventure Company
The Gear House
Camp Saver
Flat Cat Gear

I thank you for joining me on another Adventure in Stoving,

Appendix I, Radii of Stoves Featured in this Post

Appendix II, Additional Video
I shot a video with my new camera.  I'm still learning the ins and outs of my new camera, so I managed to cut off the video before I was done.  Since it's cut off, I won't put this video in the body of the review, but even though it's cut off, the video should still give you some idea of what the stove is like.