I'd done several cooking reports on the aluminum JetBoil Sol already.
But I wanted to be sure that the JetBoil Sol that I was testing wasn't somehow unique.  So, I called a buddy -- a buddy who owns a JetBoil.

So, I thought I'd do side by side omelettes on two different JetBoil Sol's.  I don't have two identical pans, so we'll just have to do the best we can.

The first pan is an MSR Blacklite, which is a very nice, high-quality backpacking pan.
And pan number two is my $5 garage sale special.  Not exactly the world's best pan, but let's see if we can get enough flame control from a Jetboil Sol to cook an omelette.
I allow the eggs to set just slightly, and then I add tuna from one of those convenient foil pouches that are so perfect for the trail.  I've also tried the salmon, and I have to say that I prefer the salmon.  Alas, no salmon today, but we press on.  Looks like the eggs are cooking up nicely so far.
Well, looks like the omelette in the Blacklite pan is about done.
And our garage sale pan omelette is fully complete.
So, how'd they turn out?  Well, let's have a look.
VERY nice.  Both omelettes turned out very well.  I got a little more browning on the omelette in the cheap, garage sale pan, but that's to be expected.  Both omelettes were very tasty.


Best of all?  No sticking.
The nice MSR Blacklite pan, as you might expect, was as clean as a whistle.  I really like the non-stick coating.
And even my cheap, garage sale pan did a pretty fair job.  No burnt food.
Now, I said that both omelettes were tasty.  But don't take my word for it, goodness, no!  I now turn you over to the very competent hands of the chief tester of the Adventures in Stoving Taste Test Team.  Let's see how our ace tester reacts.

The omelette is served:
And the first bite. 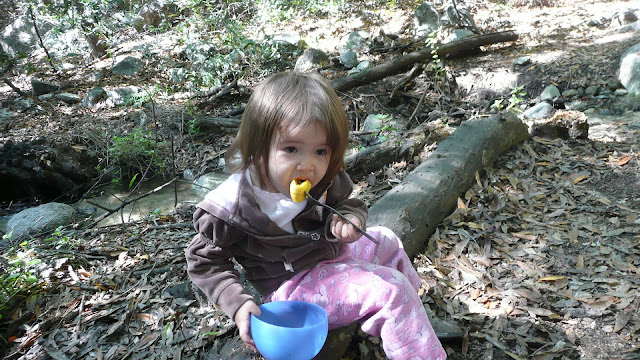 And the reaction:
Yes!  She liked it!  Er, I mean, the omelette passed the highly scientific battery of tests prepared by our Taste Test Team.  ;)

Seriously, though, my daughter is an excellent test of the taste of foods.  If she doesn't like it, she's not shy about letting you know.  If any of you are parents of a two-year-old, you know what I mean.

The bottom line?  The JetBoil I tested on was not a fluke.  You can cook on a JetBoil, even with a cheap garage sale pan like mine.  The JetBoil is a lot more versatile than most people think.

I thank you for joining me on another Adventure in Stoving.