Stove of the Week: Primus Omnifuel

If you want a stove that runs like a Swiss watch, then the Primus Omnifuel is your stove. It's precision engineering at it's best.  I mean this thing is a stovie's dream. Just look at that beautiful blue flame. 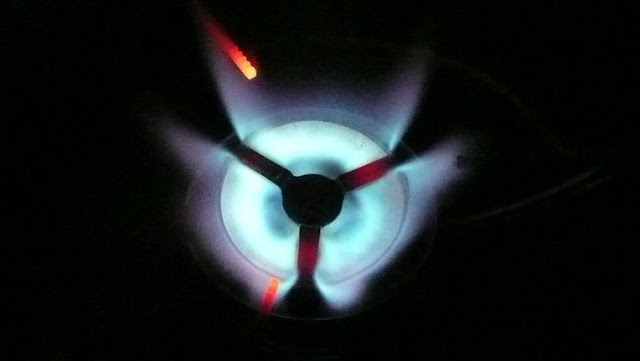 The pump's action is a smooth as silk.  Everything fits together just so.  This is one high end stove.  But enough praise, let's take a look.  First, the burner. 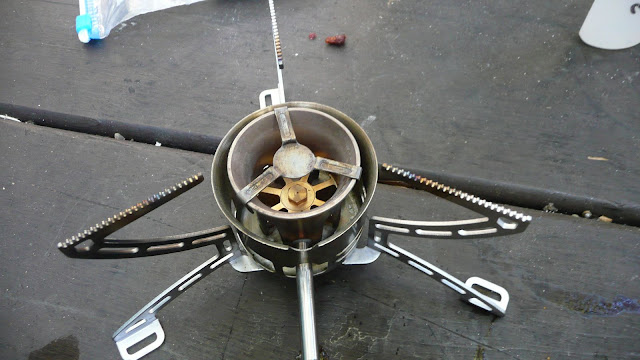 It's a roarer style burner.  I expected it to be loud, as most roarers are, but I was pleasantly surprised.  It's really quite quiet for its type. However, one would hardly refer to the Omnifuel as quiet when the flame is on high.  The Omnifuel's three legs make it quite stable, and the pot supports are well engineered to accommodate a wide (and narrow!) assortment of pots.


The pump is sturdy aluminum, a far more robust pump than, say, a plastic MSR pump.  One interesting feature to the Omnifuel is it's rotating attachment to the fuel pump.  In order to run the stove, one rotates the fuel tank around the axis formed by the valve to the "ON" position (as seen in the below photograph).  The black grooved piece of plastic that you see immediately to the left of the pump rotates freely. 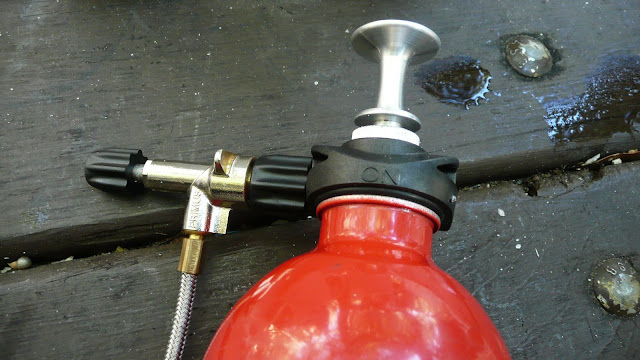 It's worth noting that the threads on the Omnifuel's pump will fit Primus, Snow Peak, Sigg, MSR, Optimus, and Brunton fuel bottles.  Here, the Omnifuel is shown with an MSR fuel bottle. 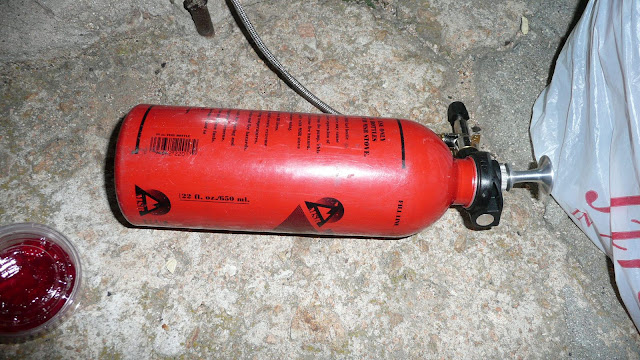 The Omnifuel, as the name implies, will run on both of the standard petroleum liquid stove fuels, "white" gasoline (Coleman type fuel) and kerosene.  The Omnifuel is not designed to work on alcohol.  In a pinch, the Omnifuel can be run on unleaded automotive gasoline or diesel.  Of course it will not run as cleanly on unleaded or diesel and will require more frequent cleaning.  Use non-standard fuels like unleaded or diesel only when absolutely necessary.  The Omnifuel's manual states that leaded automotive gasoline should not be used "for health reasons."  As much as I like stoves and as much as I'd like to do a thorough review, I'm not about to personally test that health warning!  I imagine that you could run the Omnifuel on aviation gasoline or jet fuel as well, but again do so only when absolutely necessary.

Now, all the preceding regarding fuel is pretty standard fare for a multi-fuel expedition type stove like the Omnifuel, but there's another standard fuel out there that I haven't yet mentioned:  canister gas. 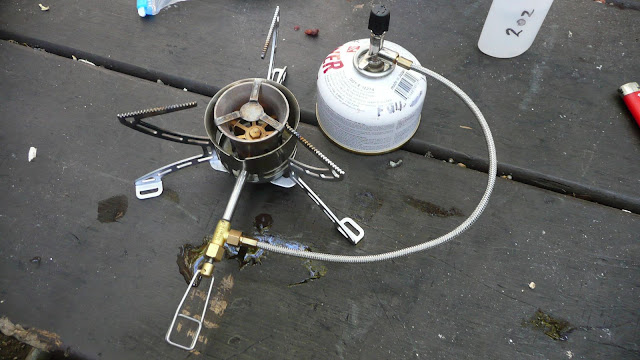 The Omnifuel can run on the same gas canisters that power such popular stoves as the MSR Pocket Rocket and the Jetboil PCS.  It's really quite ingenious how Primus managed to allow not only liquid but gas fuel to be used.  The connection between the pump and the fuel line is a 7/16ths UNEF threaded male connector -- the exact same connector as on a gas stove.  If one wishes to use gas, one screws the connector into a canister of gas.  If one wishes to use liquid fuel, one screws the connector -- the very same connector -- into the pump.  Quite clever.  Indeed, other stove manufacturers, such as Brunton with the Vapor AF and Coleman with the Fyrestorm, are copying this idea.  I don't know for a fact that Primus originated the idea, but if Primus was not the first, they were among the first, and certainly the Omnifuel is a fine implementation of the idea.. 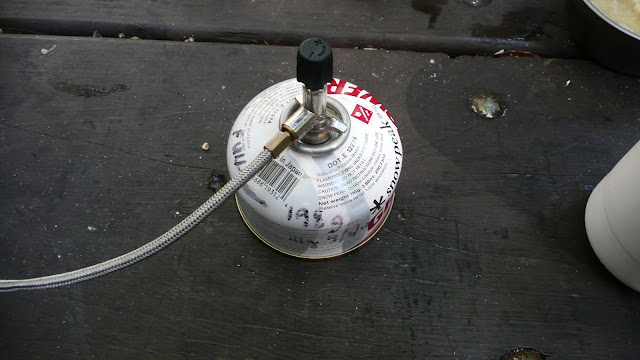 For cold weather, the Omnifuel can operate with the canister inverted, that is it can operate in liquid feed gas mode.  Normally, one would invert the canister only if a stove has a pre-heat loop (aka generator) which the Omnifuel does not  However, since the Omnifuel can burn liquid fuel, which must be vaporized at the burner, it can therefore vaporize liquefied gas.  In liquid feed mode, the Omnifuel should easily operate in temperatures down to 0F/-18C, provided that you use canisters that contain some blend of either isobutane or regular butane with propane.  Canisters of 100% regular butane will not work in cold weather.  If one employs various means to keep the gas canister relatively warm and uses a winter grade fuel (a propane blend with no regular butane), one can operate the stove in far lower temperatures. The ability to run on canister gas, which requires no priming, is a big plus if the weather is really horrible and you want to cook inside your tent.  I personally do not find the idea of priming a stove inside a tent to be appealing.

The Omnifuel comes with jets with three different sized apertures, one jet for each of the three general classes of fuel:  gas (0.45mm), gasoline (0.37mm), and kerosene (0.28mm).  Each jet aperture size is optimized to burn efficiently the fuel for which it is intended.  The lighter the fuel, the larger the aperture size.  The heavier the fuel, the smaller the aperture.  While it is best to run the stove with the correct jet for a given fuel, my experience is that the stove will work reasonably well with mid-sized aperture jet on both gas and gasoline.  I have not, as of this writing, tried all possible combinations of jets and fuels.


Let's take another look at the burner. 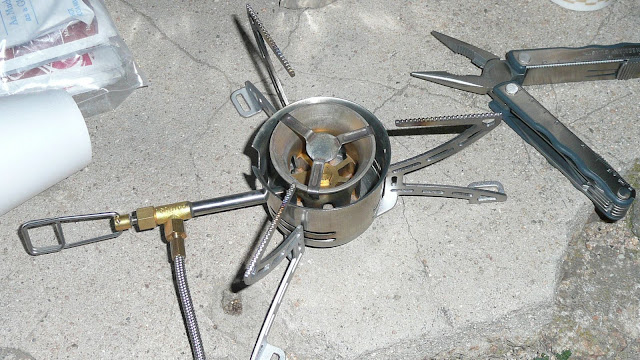 Note the wire handle attached to the rigid portion of the fuel line.  This handle controls an "at the burner" valve.  A valve that close to the burner allows one to very precisely adjust the fuel and therefore the flame.  The Omnifuel has excellent simmering capabilities, no matter the fuel. 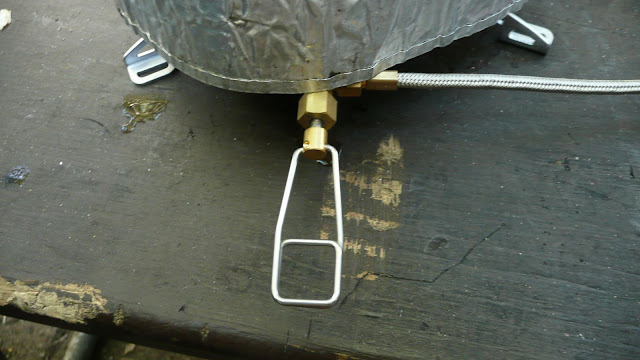 Now, a mild word of caution.  Stoves with a valve at the burner generally require a bit more maintenance than those that do not.  I am not saying that the Omnifuel is in any way unreliable.  It is a well designed, wonderful stove.  However, generally speaking, stoves with a simpler design, i.e. without the valve at the burner, require less maintenance.  With good quality fuels, there should be little problem.  However, were I going to some remote third-world location where the kerosene is likely to be quite unreliable as to its purity, I might be tempted to take a simpler stove, perhaps something like the MSR XGK.

At this juncture, let me make mention of a worthwhile aftermarket modification to the Omnifuel:  the Omnidawg silent cap.  The Omnidawg silent cap replaces the roarer plate in the Omnifuel's burner.  The Omnidawg greatly reduces the roaring noise of the burner.  I did a video review of the Omnidawg cap which I will link to below.  You will see me running the Omnidawg cap on an MSR Dragonfly stove because I didn't have an Omnifuel at the time I made the videos.  In actual field use, the Omnidawg cap works every bit as well on an Omnifuel as it does on the Dragonfly in the videos.  I haven't got the means to run the number of controlled trials necessary to establish this, but my gut feel is that the Omnidawg cap puts out more power than the roarer plate.  This perceived increase in power may be due to improved air gas mixing inside the cap, leading to increased efficiency in the flame.  Again, this is my gut feel only; I have no hard data on this.  Whether it increases efficiency or not, the cap runs extremely well and is very quiet.  People have asked in connection with the videos, so in hopes of heading off a lot of questions, let me publish the following information:  Omnidawg caps are available on eBay through seller "hugecanine."  The caps are hand made and are not always available.

Well, there you have it, a brief look at the Primus Omnifuel, a truly wonderful stove and a personal favorite.