Stove of the Week: MSR Rapidfire

OK, so this week's stove is a bit of a "sleeper" in the sense that it's not a stove that you would expect a lot from -- unless you knew better.  But you'll have to read on to find out what's so interesting about this week's stove, the MSR Rapidfire. 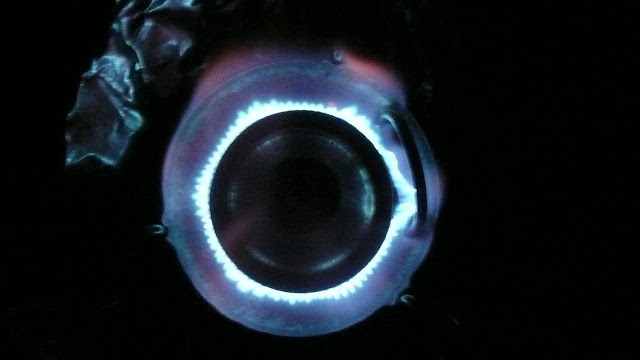 First, let's go through our usual run down of the stove, and then we'll get into some of it's unusual qualities.  So, what's with this thing called a Rapidfire?  Isn't it just a Whisperlite?  I mean seriously, just look at it.  It's a freakin' Whisperlite for crying out loud. 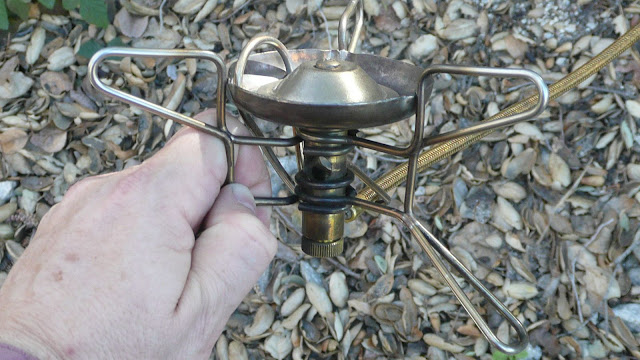 Or is it?  Take a look at the bottom of the burner column.  Hmm.  No priming cup.  OK, so what the Dickens is this thing?  Well, it is a close relative of the Whisperlite all right, but made to run on canister gas. 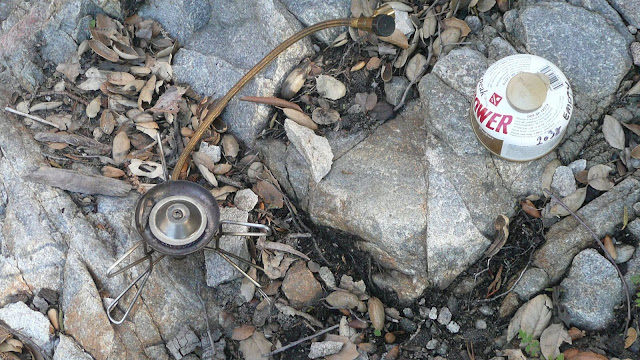 The Rapidfire was MSR's first entry into the gas stove market.  Prior to the Rapidfire, MSR was a liquid fuel only stove manufacturer.  When MSR saw how gas stoves were really catching on, they needed an entrant into the market.  How better to get there than to simply modify their existing "workhorse" stove, the Whisperlite?  Enter the Rapidfire.  Apparently, MSR was pretty paranoid about the volatility of gas as compared to liquid fuel; they really lengthened the fuel line which is odd when you consider that now the majority of MSR gas stoves mount directly on to the canister.

The stove itself is identical to the Whisperltie except for the aforementioned lack of a priming cup. 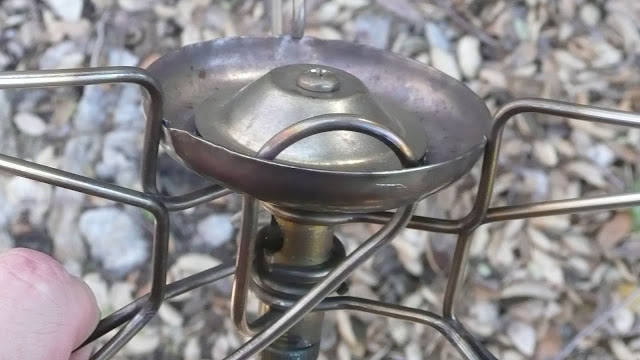 Instead of a priming cup, there's a threaded, knurled ring that holds the fuel line and legs in place. 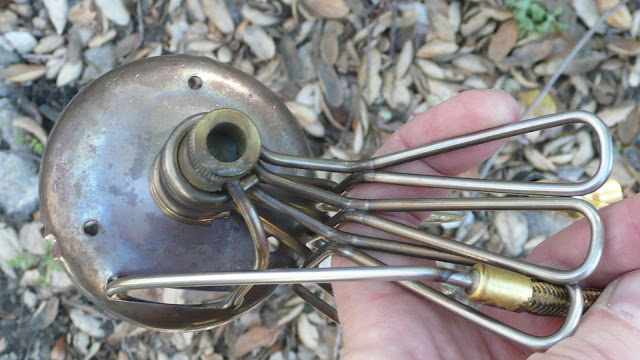 At the end of the fuel line, there's a gas connector and valve rather than the open ended tube with aluminum block and catch-arm of the Whisperlite. 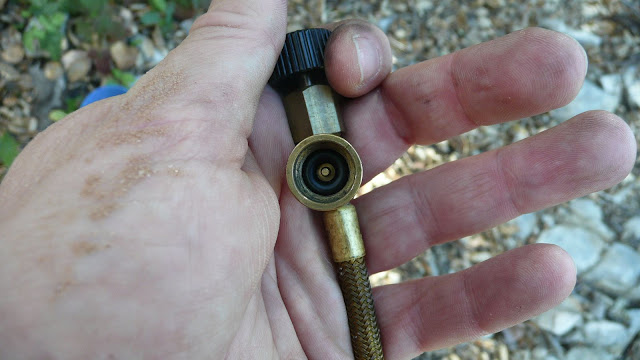 Now take a careful look at that connector. 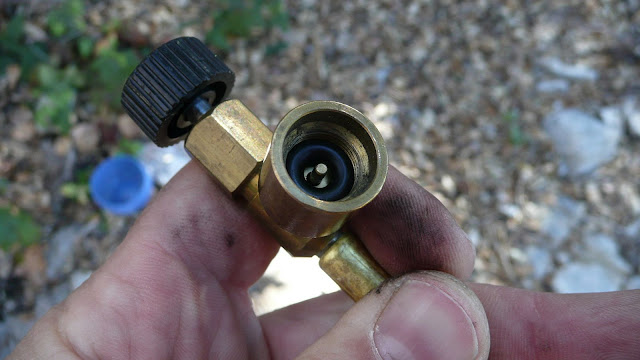 Note the central pin.  It is this pin that depresses the Lindal valve inside the canister of gas.  I've seen these pins go missing.  No pin, and essentially you've got no gas.  Second, note the black rubber "O" ring.  This "O" ring must be in place for you to operate the stove safely.  Without the "O" ring, gas may leak which could be quite dangerous.

Speaking of gas, it's worth mentioning here that the MSR Rapidfire stove can use any standard threaded backpacking gas canister.  Originally, the Rapidfire used a cylindrical gas canister, but that canister had the same 7/16" UNEF standard thread as used on today's dome shaped canisters, so there's no problem with respect to finding fuel even though the Rapidfire is an older stove.  MSR discontinued production, to the best of my ability to discern, in 2001. 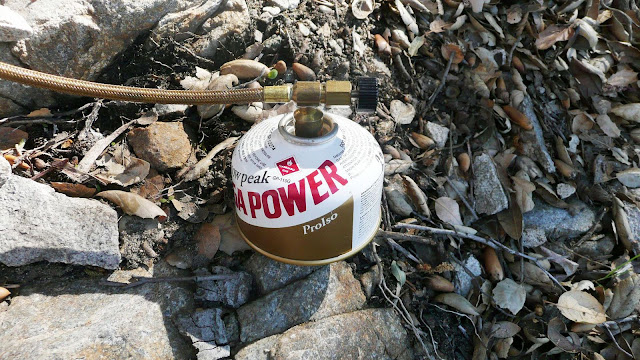 OK, so MSR needed a gas stove, so they pressed a modified Whisperlite into service, so what?  I mean does this Rapidfire have any redeeming features or is it just some kludgey attempt to not let all the other stove manufacturers run away with the gas stove part of the stove market?  Actually, the Rapidfire has several features that distinguish it from typical gas stoves, one of which actually makes the Rapidfire potentially pretty worth owning.  I'll get to that in a moment.
First, the Rapidfire, like its progenitor the Whisperlite, is a remote fueled stove.  In other words, the fuel is not directly attached to the burner but rather fuel is brought in via a fuel line from a remote source.  This does several things for us:  1) since there's no fuel tank under the burner, the burner is lower which brings us out of the wind.  2)  Also since the burner is lower, the stove is more stable.  3) Lastly and most importantly, since the fuel isn't local to the burner, we do not have to worry about heat radiating from the burner and overheating the fuel -- which means we can use a windscreen with complete impunity.  Use a windscreen the wrong way on a typical canister stove, and you could turn your stove from a domestic servant into a domestic terrorist.  Overheated canisters can and do explode.

Speaking of windscreens, here's a Rapidfire all set up with a heat reflector and windscreen, a very efficient cooking set up. 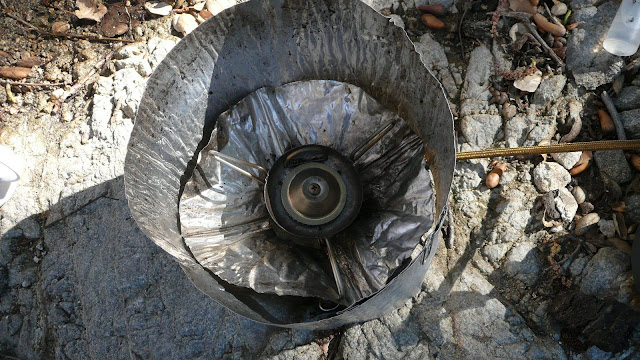 Now, I keep blathering about something special about the Rapidfire.  Let's take a closer look at the burner itself shall we? 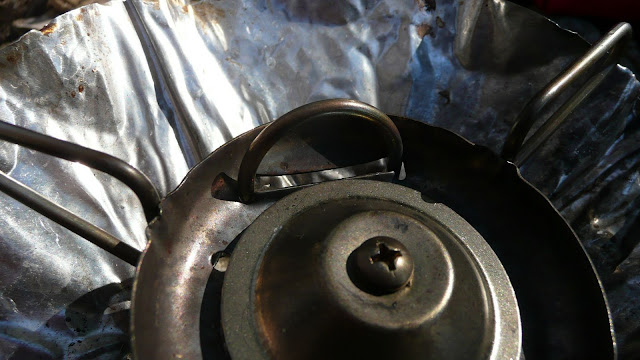 Do you see that loop in the burner?  That's the fuel line.  That loop is referred to as a pre-heat loop (or generator).  The loop is exposed directly to the flame when the stove is in operation.  Fuel flows into that loop before it enters the burner, which greatly heats the fuel.  In a liquid fueled stove, that heat is what turns the liquid into a vapor so that it can be burned.

Are you?  Really?  Pick up a full canister of gas and shake it.  Hear that sloshing sound?  That's a liquid in there.

OK, great, it's a liquid in the can but it's a gas when it comes out of the burner, so I still don't care about that pre-heat loop; can we just move on?

Well, not so fast there.  Yes, you're right, it is a gas when it comes out of the burner.  Usually.  But what about cold weather?  Gotcha.  That's the problem with gas stoves.  They lose power when the weather gets below freezing because the liquefied gas in the canister won't vaporize properly.  Remember that pre-heat loop?  There's our answer.  In cold weather, we let the liquefied gas stay liquid, and we let the pre-heat loop vaporize it for us.  In that way, we don't care if it's cold or not.  We don't use the air temperature to vaporize our gas, we use the heat of the flame.

Uh, great Jim, but the connector attaches to the top of the canister, and all it's going to draw is gas off the top.  If there's no gas, we've got no fuel.

This is not a problem.  Just turn the canister over.  Note:  Do not invert the canister on a gas stove that does not have a pre-heat loop.  A serious flare up might result. 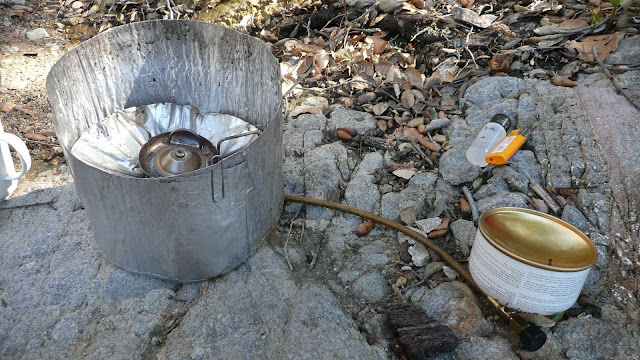 The top of the canister is now the bottom.  That portion of the fuel that is in vapor form now acts to pressurize the canister, pushing liquid down, out of the canister, and down the fuel line.  The fuel stays in liquid form until it hits the pre-heat loop where the high heat causes it to change from liquid to gas.  The resultant gas comes rushing out of the burner, and baby you've got flame.  Note that the stove is in operation in the above photo.  When gas is fed in liquid form to the burner, the stove is said to be in liquid feed mode.  Note that I said liquid feed not liquid fuel.  The fuel will still be a gas at room temperature and pressure.  We haven't changed fuel; we've merely changed the form that the fuel is fed in. 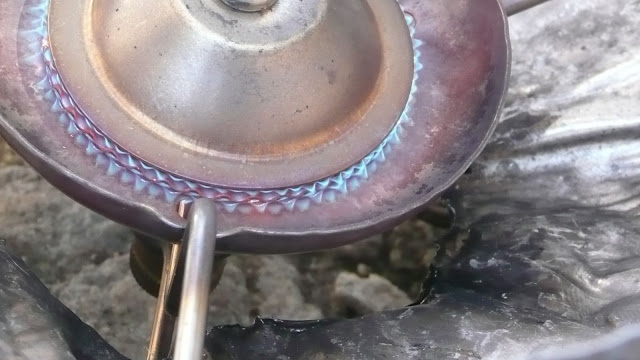 Using a gas stove in liquid feed mode is an important capability for a couple of reasons:
1.  Normal gas stoves operate in vapor feed mode, that is the fuel is fed in as a vapor, and you have to rely on the ambient temperature to vaporize your fuel.  In liquid feed mode, you rely not on the outside temperature but on the heat of the flame.  Stoves in liquid feed mode will operate in colder weather than normal gas stoves.
2.  In normal gas stoves, the fuel is typically a propane-butane or propane-isobutane blend.  Propane, the gas that works best in cold, has a higher vapor pressure and burns off faster leaving you, toward the end of the life of the tank, with a tank full of your worst performing cold weather fuel. In fact, you may wind up with a canister that is still 30% full that you can't coax any gas out of because all the good propane has burned off and nothing is left but the lesser performing fuels.  In liquid feed mode, all the fuels are burned at a constant rate.  The fuel towards the end of the life of the canister is the same mix as at the start of the canister.  In liquid feed mode, you don't get such horrible "canister fade" like you do in vapor feed mode.

I normally recommend a cut off of about 20F/-7C for normal gas stoves -- and that's with using "tricks," having to put up with less-than-stellar performance, and potentially having fuel that you can't get to vaporize.  With a gas stove in liquid feed mode, you can easily go down to 0F/-18C without having to use a lot of tricks, with full performance, and without having a portion of your fuel being unusable.

In other words, with a gas stove in liquid mode, you get all of the convenience of gas without all the low performance and hassles associated with gas in cold weather.  Uh, couldn't I just use a regular liquid fueled stove?  Sure.  If you're comfortable with liquid fuel, go for it.  But consider this:  If it's really snowing hard and you need to cook inside your tent do you really want to use liquid fuel?  What happens if your priming gets a little out of hand?  With a gas stove in liquid feed mode, you get liquid fuel performance but without the danger of priming.  And of course you get all of the usual convenience of a gas stove.  One of those conveniences is simmering.  It's pretty tough to get the typical Whisperlite to simmer like this: 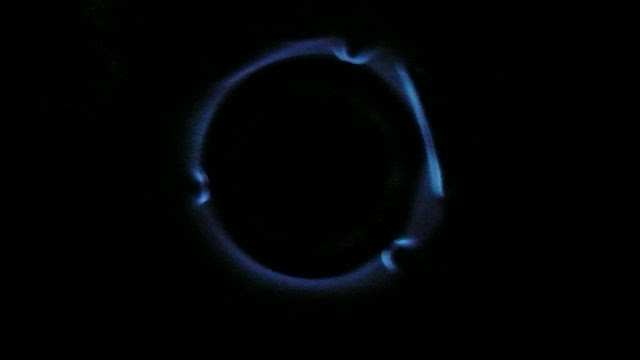 And that's without monkeying around with only filling the fuel bottle half full and only pumping a few strokes.  Easy, just about automatic simmering in other words.

Now, in all fairness, other remote canister gas stoves have pre-heat loops. Other remote canister stoves can operate in liquid feed mode.  What makes the Rapidfire a "sleeper" -- a stove you wouldn't expect much from but turns out to be a pretty good stove?  Well, take a look at the price tags on some of those stoves out there that are remote canister stoves and have pre-heat loops.  They're expensive.  The Rapidfire is an older, discontinued stove, most people haven't heard of it, and you can pick one up for a much more reasonable price than you can some of the current production stoves.  All the performance at a fraction of the price.  You heard it here on Adventures in Stoving.  :)  Also, the Rapidfire's fuel line rotates easily at the connector which makes it easy to invert the canister to put the stove into liquid feed mode.  The Rapidfire's more modern cousin, the Windpro, does not rotate easily at the connector.

Yep, the Rapidfire is a "sleeper," but don't underestimate this stove.  It's a lot of stove for the money.

Well, looks like the kettle's boiling.  I'd best get to that cup of hot chocolate before it gets cold. 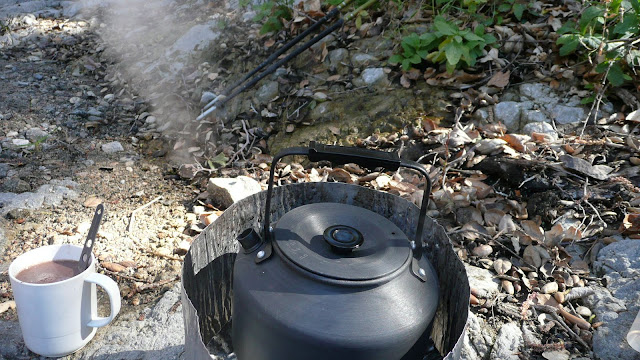 Thanks for joining me on another Adventure in Stoving.

The MSR Rapidfire
What's good about it?
Able to operate in liquid feed mode
Economical
Can use a full windscreen with impunity even though it's a gas stove
Simmers well
Connector rotates easily for liquid feed mode
Quiet
Fairly compact
Reasonably powerful
Reliable
Stable
Efficient