Please note that my concerns pertain to the titanium version of the JetBoil Sol only.

What are some ways to minimize the risk of damaging the heat exchanger?
1.  Only boil water.  Water typically does not exceed 212F/100C in temperature.  Yes, salts and minerals in the water may raise the boiling point a bit, but it will still be somewhere near the typical boiling point.  Water makes a very effective way of putting an upper bound on the amount of heat the pot and heat exchanger is subjected to.
2.  Moderate your flame.  Yes, I know, you bought your JetBoil because it's faster than a speeding bullet, but really, will a moderate flame make that much difference?  What, 30 seconds more?  How much is an undamaged heat exchanger worth?  A few more seconds wait is well worth it if you save your heat exchanger.  The titanium version of the JetBoil Sol isn't cheap, now is it?  So slow it down a bit, yes?
3.  If you do heat up something that's a bit more than water, stir it continuously.  If you burn something to the bottom of the pot, it could form an insulating layer.  That insulating layer will act as a barrier and not allow heat to be transferred from the exchanger into contents of the pot.  You do NOT want anything to block the normal heat transfer.  If the heat builds up in the fairly thin aluminum of the heat exchanger, that's when damage is most likely to occur.
4.  Don't heat up something with a low moisture content.  The JetBoil's instructions (see appendices, below) state as much.  Personally, I wouldn't heat up anything thicker than the slurry formed by adding water to a freeze dried meal, but whatever you heat up, make sure it has a lot of water content.

Now, for the above, I said "typical case."  By that I mean typical case where there has been some type of problem.  Of course 99+ percent of the time there is no problem.
Beyond the typical problem cases as described above, there have been a few, very few, cases where something more unusual happens.

One blogger reports that he was just heating water on a moderate flame when part of his heat exchanger melted:  A blog post describing a melted JetBoil Ti Sol heat exchanger

Also, here's a YouTube video where the heat exchanger becomes separated from the pot:

What happened?  Well, we can't tell exactly from this video, but we do know that aluminum and titanium are rather dissimilar metals.  The rates of expansion and contraction during heating and cooling between the two metals are quite different.  Every time you heat or cool the two metals, the two metals will be pulling on whatever joins them, presumably a weld in this case.  Given that the above happened in cold weather, the two metals may have been put through quite a temperature range, causing the weld to separate.  I'm speculating of course, and this is the only reported case I've seen of this type, so I wouldn't read too much into it.  However, neither would I plunge a hot titanium JetBoil Sol into an ice bath.

So, caution two:  Rapid swings in temperature might cause problems with the heat exchanger.  Taking steps to moderate the rate of temperature increases and decreases is only prudent.

Now, one last case, and this one a bit more troubling.  But, while troubling, this is only one case out of the presumably thousands of titanium JetBoil Sols out there.

Let's go back to the JetBoil Sol Ti originally shown in the first photo above.
Let me include the original post that I saw on the internet which prompted me to issue my "caution:"


I looked over at my jetboil and all I saw was this massive flame. The flames were probably three feet in the air. I ran over and dumped the last of my water on it (and thus went that night and the next morning w/o water) and when everything cooled down, there was evidences of some serious super heating. The little 'flux rings' ended up super heating and they were just going ballistic. The flux ring material got so hot that it started dripping down onto the ground (which did not go out when my threw my water on it, that stuff was crazy hot) and the drops of super heated metal were all over the canister - which scared me the most. A few of them actually melted/welded onto the canister of gas. The stupid orange thing was completely melted (I had to take a dremel to cut it off when I got back home - which is where I learned how easy it was to take them off). The bottom of the pot (not the flux, the bottom) as you can see in the photos above suffered major heat damage - and remember, titanium has a melting point of 3034(F).

I honestly can't see any heat damage on the titanium pot other than normal "rainbow" discoloration, but if there were three foot flames and temperatures hot enough to melt aluminum, that's very serious, and that kind of heat could potentially cause a canister explosion.  What we don't know here is what led to that flame.  Did the water boil over onto the canister?  If water did boil over, as on all canister stoves, the boiling water could cause the internal pressure within the canister to dramatically increase which might cause a flare which might lead to the kind of flame and damage reported above.

Therefore, caution three:  As with all canister stoves (this certainly isn't unique to the titanium JetBoil Sol), avoid boil overs.  The JetBoil is a very powerful stove.  Do not leave the stove unattended.

And, yes, I've left various stoves unattended before; we probably all have.  Maybe with a stove as powerful as a JetBoil that's not something you want to do.

If you saw earlier versions of this post, my earlier caution indicated that you might want to a) hold off on buying a titanium version of the JetBoil Sol until more was known and b) if you've already got one that you might want to set your titanium JetBol Sol aside for a bit, again until more is known.  I made those recommendations in light of the potentially serious incident with the three foot flames.  With such potentially serious consequences, I felt such a caution was warranted.

Now, after gathering more facts, conferring with others, and analyzing in greater detail the available cases, I don't think such measures are necessary.  Far more people have come forward saying that their titanium JetBol Sol works perfectly fine than people who have had a problem, and the one severe problem may have been caused by a boil over, not a product defect.  A boil over would affect any canister stove, not just a JetBoil.  Therefore:
I see no inordinate danger in the titanium JetBoil Sol at this time.
Do, however, see the above three cautions, and heed them.  You should also follow the directions provided by JetBoil, excerpts from which are included in the appendices, below.

Stoving.  Sometimes it's a whole lot more Adventurous than we expect.  :)  But then that's why you read this blog.  I thank you for joining me.

P.S.  JetBoil, if you're reading this, I would love to have any additional insight or advice that you might be able to provide.  You can reach me at hikin dot jim3 at gmail dot com (replace the word "dot" with a "." and the word "at" with an "@").  I would be happy to add your input to my blog.


*By "occasional" I mean that very few units seem to have been impacted.  I do not mean that all units will occasionally have a problem!


Links
Update, 1 Mar 2012:  The above linked BPL forum posts have been removed from public viewing.


JetBoil related posts
Appendix I -- JetBoil Sol Instructions -- Excerpts
The following are excerpts from the instructions for the JetBoil Sol.  All of them appear to be sound advice.  Note that they stress how important it is to avoid a boil over.  Update 2 Mar 2012:  I've added photos of the actual instructions that come with the JetBoil Sol Ti in Appendix IV.
OPERATION WARNINGS
Do not leave Jetboil SOL unattended while in use.
DO NOT fry or cook foods with low moisture content.  Use low flame settings when heating liquid foods to avoid boil over.  If heating liquids near maximum capacity, use only low flame settings and exercise caution to prevent boil over.
OPERATING INSTRUCTIONS
If you overheat the canister, it will explode.  Ignite burner before placing pot or cup on burner.
DO NOT HEAT EMPTY COOKING CUP.  Add liquid or liquid food to the cooking cup.  Use low heat when filling above 0.5L, boil over can result.
Appendix II -- Melting Points


Appendix III -- Disclosures
I own several JetBoil stoves including the aluminum version of the JetBoil Sol, but I do not own a titanium JetBoil Sol.  I am very happy with the JetBoil products I own.  I have used JetBoil stoves at altitudes up to and above 11,000 ft/3300m without problems (well, except for the piezoelectric ignition, but that's a known and pretty minor issue).  I believe JetBoil is a good company with a good product. 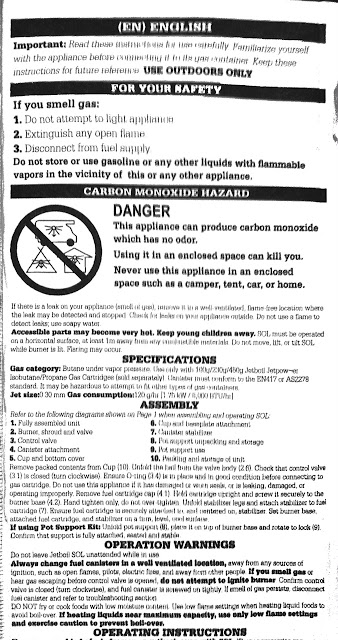 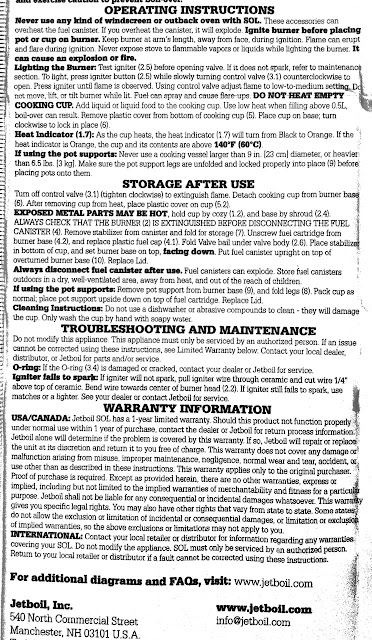